Due to the holidays, we missed a few game days for D&D Encounters, so we made up for it today. We played a double session, bringing us through part five and six. My character was Gardain, a Dwarf Knight. He would be joined by a female Dark Elf Shadow Mage named Eboncross, and a male Drow Elf Ranger named Belgos. The Dark Elf players declared that they wanted to go through town searching for more clues about the cultists. I declared that Gardain was going back to the Inn for a long rest. And so … the adventure continues … 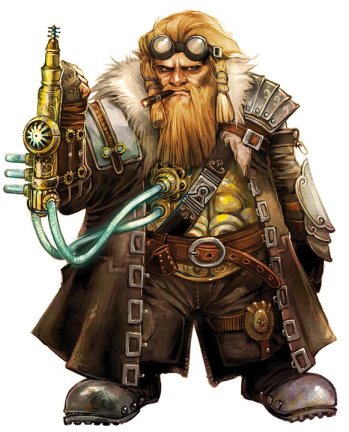 The storm continued raging over Neverwinter, but the rain and wind slowed significantly. The heroes took advantage of the break in the storm to take care of some personal business before heading to Helm’s Hold where they were going to meet Elden Vargas.

After all the recent events leading up to the Night of Madness, it was time for a rest. Gardain retired to the Inn, and took a hot bath. Afterwards, he slept for as long as he could. Upon waking, he got geared up and headed downstairs for a hearty meal, some cold ale, and a long smoke.

It didn’t take long for the Dark Elves to show up and shorten his enjoyment of eating, drinking, and smoking. Eboncross and Belgos started rambling on about how they’d had a run in with some more cultists, but managed to dispatch them rather easily. They set a Scroll of Protection (level 5) on the table in front of Gardain, saying that it was his cut of the treasure.

(It was part of the randomly rolled treasure and nobody wanted to keep it so they decided to give it to my character.)

The Elves explained that Lady Sala Nidris contacted them again, asking for armed escort to Helm’s Hold, a cathedral turned hospital dedicated to helping those inflicted by the Spellplague. A safe haven for those in need, the doors of Helm’s Hold are always open.

Gardain finished his meal, and then they rode to meet Lady Nidris. When we arrived at her home we were welcomed warmly. Lady Nidris was clearly upset. She told them how Zan became enraged and acted wildly when the whole town was enchanted by the Madness. Her guards had to subdue Zan before he hurt himself or someone else. Mintarn soldiers were called and took Zan to Helm’s Hold for treatment. Lady Nidris misses her son greatly and will be heading to Helm’s Hold as soon as the storm passes. That is why she needed an armed escort.

When they finally arrived at the sanctuary about 4 hours later, there was a group of people milling about outside. When they saw us, they stared to cheer. “Now we’ll get them to open the doors,” someone called out. The heroes dismounted and approached the front gate. When they knocked the Guards spoke through the doors. “No one enters; no one leaves.”

“There’s a riot in progress,” the Guard explained. “Some of the more violent patients are running wild and cathedral is on full lock down until order is restored. It’s for the safety of the people inside and outside.” The crowd gathered outside, and started to shout protest. Lady Nidris started crying, worried for the safety of her son.

Gardain used his connections as a military leader to ply his way inside, along with his two Dark Elf  “advisers.”  Lady Nidris remained outside with the other angry civilians. Going inside, we were almost immediately caught in the whirlwind of the riot. We were forced to put down several guards and residents who were driven to violence by the Madness. During the melee, we discovered that Vargas was there, and helped him to fight off some more crazed guards. During the melee, Vargas shouted, “You keep them busy, I’m going to find my wife and make sure she’s safe.” And then he ran off in the opposite direction.

We fought our way through the chapel, arriving in the Main Hall. As we rushed in, the doors slammed shut behind us. Beligos and Eboncross attempted to shove the doors open and found them locked, as if by magic! We turned and saw a black-cloaked figure wearing a bright red devil mask – the Tormentor! He was standing over a kneeling woman we all recognized as the Prophet Rohini. Rohini was clearly in pain, while the Tormentor poured fiery magic into her from his outstretched hand. Around the room are numerous white robed Acolytes, as well as, a green-skinned Elf. The Elf held a woman in his arms.

Gardain sneered, and raised his craghammer towards the form of the Tormentor standing in the main hall. He shouted, “By the Clocks of Neverwinter, today you breathe your last breath!”

The Tormentor looked up, recognizing Gardain’s voice. His concentration momentarily broken, Rohini reached up and pulled away his mask before she collapsed.

The Tormentor was Elden Vargis.

“I see the time for deception is at an end,” he said. “Chartilifax, give me Karis and deal with this rabble.”

The Elf handed over the woman to Vargas and then turned to address the party. “Little heroes have come to play, little heroes die today.” His body shifted, his bones cracked as his limbs and torso distorted. His shoulder blades burst through his back and became wings. A Green Dragon reared up, rolling mad eyes and expelling poison fumes.

The poison washed over all of us, but did not stop us from fighting. Eboncross started coughing, and fell to her knees. Beligos fired twice with his bow, killing a white-clad cultist with each hit. Gardain moved to stand in front of Eboncross, swinging with a Cleaving Assault to kill two more cultists. Meanwhile, Vargas started to run across the Main Hall, attempting to escape.

The Green Dragon roared, and flapped it’s wings. It leaped into the air and positioned itself between the three heroes and the retreating traitor. Beligos fired two more times, felling two more cultists. Eboncross, still kneeing but recovering from the dragon’s deadly breath weapon, cast a spell which caused two more cultists to cry out, clutching their heads, and falling dead to the floor. Gardain assumed his Defender’s Stance and pulled out the Scroll of Protection which had seemed so worthless only a few hours ago. He unfurled it, and read it’s words. Suddenly they were surrounded by a magical aura that affected the Green Dragon, holding it at bay. As long as Gardain did not attack, the Dragon would not be able to move within the area effected by the scroll.

Gardain held the Dragon at bay while Beligos and Eboncross rained down magic and arrows on the Beast. Unable to recharge it’s breath weapon effectively, the Dragon was rendered nearly helpless by the simple scroll. In a rage, the Dragon flew away in retreat.

The Prophet Rohini thanked us for the help and asked us to pursue Vargas – a task which Gardain was happy to do. Howeverm Gardain asked the prophet to please look for Zan and make sure that he was safe, She agreed and explained that Vargas had likely teleported upstairs. She wished them luck, and said a prayer over them for protection. We took a quick short rest before they headed towards the spiral staircases heading to the cathedral’s upper levels.

Rushing upstairs, we discovered that the next level was in shambles. The stairs in the center of the room leading up to the top of the tower was crumbling, and surrounded by at least five Lightning Elemental Vortex creatures. We crouched at the top of the stairway, and whispered about the odds of fighting these creatures. The odds did not seem to be in our favor, plus we needed to catch Vargas. Beligos decided to cast a Darkness spell on himself, cloaking him and anyone near him in complete darkness. We watched the elementals moving around the room, and made for the stairs. We all managed to be stealthy enough to slip past the elementals, and up the stairs towards where we hoped Vargas was waiting.

Gardain planned on making good on his promise to Vargas, the Tormentor.

This was the end of Sessions Five and Six