I am a fan of Firefly. That is no secret.  So when the Serenity Role-Playing Game came out in 2005, I bought two copies of the hardback book. I attempted to convince my group of friends at the time to give it a try, but they weren’t interested. So I slid the book on to the shelf, and shrugged it off. Then when the license for the game ended in early 2011, I took notice but it didn’t surprise me. Firefly had been cancelled a long while ago, and Serenity was the last we were going to see of the show.

But then in the middle of 2013, I started hearing rumors of a Firefly Role-Playing Game with a new license, I took notice and started following all the gossip. It turned out that the new Firefly Role-Playing Game would hit public sale right about the time a Firefly Board Game and new comic book series called “Leaves on the Wind” rolled out. However, the Firefly book was a Gen Con Exclusive. Or so they claimed. Later it was available the the Margret Weis Productions website for the general public.

About a month before the book came out at Gen Con, a friend of mine named Julia posted to my Facebook page. The post was a advertisement for the 2005 Serenity Role-Playing Game. She didn’t know that I already owned two copies of the book. I replied, “Yeah, I own it. I tried to get the guys to try it out but they were too wrapped up into D20 Iron Kingdoms at the time.” She made it clear that she wanted to try playing it. I smiled the biggest grin, and typed: “Cool, but there’s actually a new version of the game coming out soon. We should try that one!”

Anyway, I contacted a good friend from the Privateer Press Gang and had the book Ninja’d from Gen Con. It arrived in the mail quickly, and I started reading. I was impressed with the game mechanics, and the rules set. It was simple enough to allow for narrative gaming, complex enough to be interesting, and different enough to be unique. I was not familiar at the time with Cortex Plus, but the general rules and game play reminded me a little of First Edition Shadowrun that I played with my friends in high school.

We’re still flyin’. The Firefly Role-Playing Game is a lot of fun. I have a group of six regular players, and a few others who are interested but haven’t actually played yet. The rules are fairly simple and smooth. And we’ve been enjoying every minute of it. 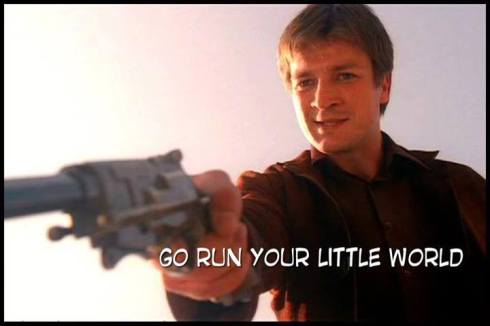 Green Horns was where it all started. This storyline involved meeting with players either in pairs or alone to play through a short introduction to the game. The players got to test out their character, get a feel for the rules, and learn about the Firefly RPG system. Allowing each player to get a feel for the game at their own pace really helped during the first session with all six players at the table at once.

On the timeline, Green Horns takes place right before the first episode of Firefly, “Serenity.” I imagined that all this stuff with Liberation’s crew was going on at about the same time Simon was getting into trouble and working with the “Underground Movement” to bust River out of the Institute’s Area 54.

I have to admit that I considered running the first episode as exactly that: Breaking River Out. Nobody ever saw who the crew was that helped Simon. All you really saw in the Serenity movie was a glimpse of a ship and the platform that was lowered for their escape. So, I thought about making it that our Crew was the one that rescued the Tams and delivered them to Persephone. But my wife got a whiff of my plans and made the remark “Oh, let me guess, we’re going to be the people who saved River.” So I thought about it a little more, and decided not to go with that idea. However, if you’re looking for a cool way to begin your campaign … do it.

Green Horns was a lot of fun. The sessions helped to develop the characters and the plot. It also helped me to decide to run Wedding Planners rather than Shooting Fish. I like the idea of Shooting Fish, but it feels like an episode of the A-Team to me. Some gaming groups would probably excel within that story, but I felt that mine would not. After all, the first rule of being a Gamemaster is to know your audience. Wedding Planners just felt like the right way to go.

The Episode Guide has a listing of the Sessions of Green Horns, played from 10.5.13 to 11.7.13 along with three interludes. 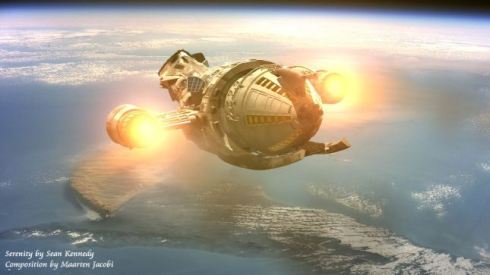