Skip to content
Posted on September 18, 2015September 19, 2015 by Big Rich Posted in Dungeons and DragonsTagged Gorzaug, Rise of Tiamat

“Abashed the devil stood and felt how awful goodness is and saw Virtue in her shape how lovely: and pined his loss”
― John Milton, Paradise Lost

When last we saw our heroes, they were standing within the long forgotten vault of RAS EVIL GRIN, containing a pillar which supposedly has the eye of a fallen sun god’s avatar. They has been suddenly plunged into darkness and then the floor began to shake. Debris fell from the ceiling, and after a few tense seconds that felt like hours, they saw two pinpoints of yellow light appear in the darkness. The lights seemed to resemble yellow glowing eyes, and they were hovering about six feet above the pillar.

Gorzaug was also a Glabrezu demon, a type III demon, also called by some Howling Demons. Glabrezu tempt their victims into ruin by luring them with power or wealth. These demons are as tall as giants, with broad, muscular bodies. Two of its four arms end in clawed hands and two end in powerful pincers. Its doglike head is horned and its muzzle is full of sharp teeth. Glabrezus rank second behind the succubus in terms of demons that tempt and corrupt mortals. Unlike them, the Glabrezu does not offer pleasures of the flesh but offers power, wealth, and respect undreamed of by even the most ambitious person. 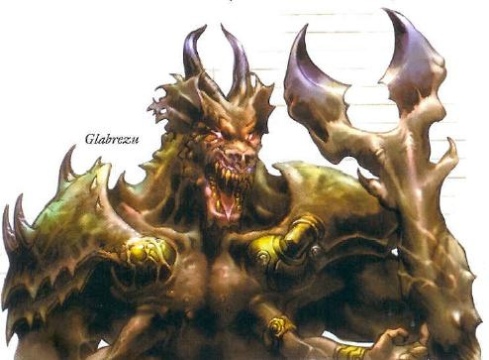 Gorzaug knew that he had to do his duty and obligation to Tiamat by guarding the elevator to the Temple of Darkness. But he also knew the present state of the Blood War, and the plans of his Mistress, the Nemesis of the Gods, Tiamat. Allowing the heroes entrance into the Temple of Darkness might somehow lead to Tiamat’s defeat. And perhaps that would allow him a bargaining chip to change his duties … and it had been so long since someone actually came to this spot, this forgotten section of the Mountain.

He managed to strike a deal with the heroes, save for the monk who refused to strike a bargain. Gorzaug allowed the mortals to go ahead, dropping the wards and activating the daïs that began to slowly descend with them standing on it. Gorzaug watched the monk walk away, wondering how long it would be until the human returned begging to make a deal with him. Gorzaug decided at that moment that he would only accept the monk’s soul in return for entrance into the Temple.

And then Fo double-crossed the demon. He used his powers of Ki to teleport, moving suddenly to stand in a relatively empty spot upon the lowering daïs. Fo smirked at his friends, and most of them looked at him with horrified looks on their faces. Fo had just broken a deal with a demon. That wasn’t a wise thing to do.

The demon came down the shaft all fangs and claws. It roared with delight, finally being permitted to taste the flesh and blood of mortals again. Without such a faux pas as the one committed by the monk, Gorzaug was not able to engage in combat or attack the mortals who visited the RAS EVIL GRIN shrine seeking the favor of Tiamat. However, the monk had entered the shaft without bargain and without gift. Gorzaug was now free to twist, and bite, and tear, and rend. He was free to feast.

The battle did not last long. Within a few moments, Gorzaug was defeated. His manifestation was weak. He had not been allowed to leave his fetters for uncountable years. The Cult of the Dragon had always been careful to deal with him in the ancient ways and pacts. They had always been respectful. They had always bargained for entrance. And then in the past few years, they simply stopped using this entrance. They abandoned it, and converted the old walkways into a sewer system. Blasphemous, but effective. Gorzaug could not devour the souls of the treacherous if none came to the shrine and the shaft. Gorzaug grew bored, and weak. Until now.

As the last blow landed, Gorzaug felt his material form falter and unravel. He felt his essence being dispersed and dragged back to his home within the Abyss. And then it happened, as always, that this force was altered. Tiamat’s curse intervened with the natural way of things. Instead of being thrust into the Abyss where he would be trapped, he was sucked back into the pedestal at the top of the shaft.

As the heroes continued to descend through the shaft, Gorzaug reformed near the pillar. He glanced down at them, and flexed his muscles. He felt stronger now. More robust. Ready for souls. Ready for blood. He smiled and took a step towards the shaft again. The monk would rest in Hell tonight, a feast for Tiamat’s children.